Green tomato jam is an old-fashioned treat, and a tasty way to use green tomatoes at the end of the season. Made with under-ripe tomatoes, it has a unique flavor that’s surprisingly delicious. 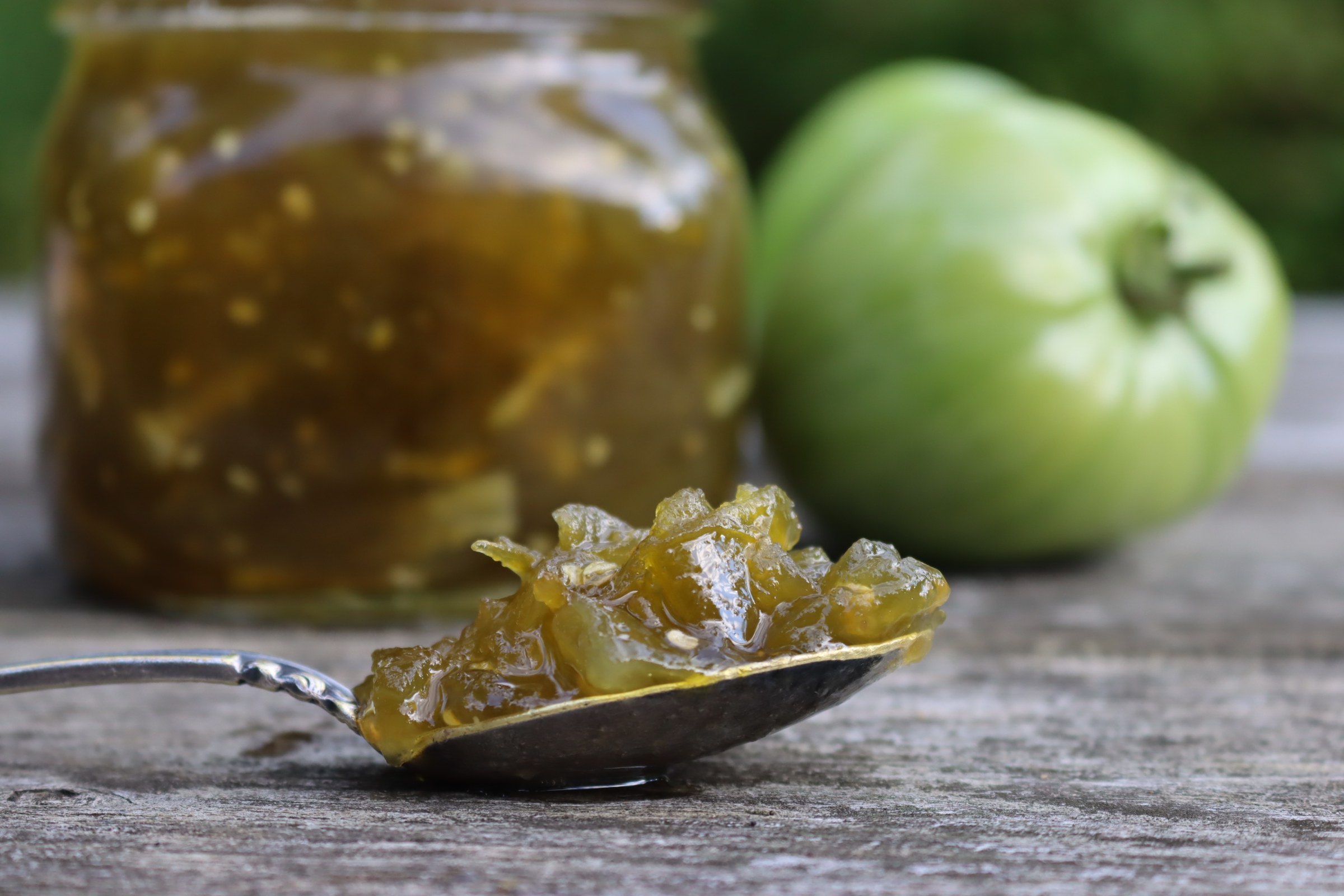 Most gardeners hate having green (unripe) tomatoes left over at the end of the season.  The frosts come early, and you’re running out to the garden to harvest everything before everything is ruined by the cold.  You find yourself bringing in literally buckets of green tomatoes, all of which would have ripened up nicely…if the frosts had only held off for another week or so.

You can, of course, ripen those tomatoes on the counter, but I think it’s even better if you take this opportunity to use them just as they are.  Take the early frosts as an opportunity to taste old fashioned green tomato recipes that have stood the test of time, and with good reason.

Green tomatoes have their own unique flavor, and they can be absolutely delicious if prepared correctly.

This old fashioned green tomato jam is a real treat, and something you’ll never find in stores.  It makes an incredibly unique homemade gift, and it’s surprisingly delicious. 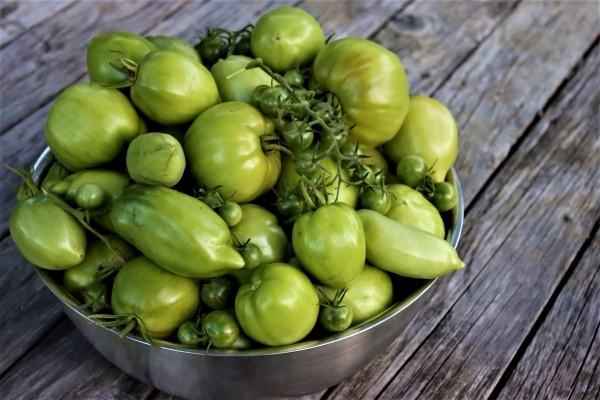 It’s an old fashioned green tomato jam recipe that has stood the test of time.  It sets nicely, and has just enough spice to keep things interesting (but not overwhelm).  This recipe is adapted from the Beginners Guide to Canning by Diane Devereaux (pg. 38).

To make 8 (1/2-pints) or 4 pints of green tomato jam, you’ll need 6 pounds of green tomatoes—this usually works out to around 24 medium-sized tomatoes, but the number will ultimately depend on the weight. I’ve made this recipe using tiny green cherry tomatoes as well as larger green heirloom varieties, a kitchen scale takes all the guesswork out of how many tomatoes you’ll need to make green tomato jam (as well as any other type of canned good).

It’s important to note that “green tomato jam” is made with under ripe tomatoes, not fully ripe green heirloom tomatoes.  If you want to make jam with regular ripe tomatoes that just happen to be green in color, you’ll want to use my regular tomato jam recipe.  It’s darn delicious, but the cooking process is a bit different because tomatoes have less natural pectin once fully ripe.

Beyond the green tomatoes, you also need spices including cinnamon and cloves, which will give warm flavor notes to the finished jam.  And sugar, of course.

I know that 5 cups of sugar might seem like a lot, but if you have any experiencing making jam you’ll know that sugar plays an important role in jam recipes: it adds sweetness and it also helps the pectin in the tomatoes set.  It’s also important in this particular recipe because green tomatoes sweet like blueberries or peaches, so they need a bit of extra help to make a high quality jam.

If you want to reduce the sugar, you can safely reduce the sugar to about 2 cups and still get the jam to set.  Your yield will be much lower and it’ll obviously be much less sweet.  More like a relish than jam, but without the added vinegar to really give it a bit of zing that’s characteristic with relish.

I’d suggest trying the recipe as is first, and I bet you’ll be surprised what a unique jam flavor you can get from green tomatoes.  As a full sugar recipe, it’ll truly be a green tomato jam…and if you want relish or ketchup or something else later, you can adjust the recipe and try reducing the sugar and adding vinegar to make it your own.

How to Make Green Tomato Jam

Start by assembling your ingredients and preparing your water bath canner (if canning).

Using a sharp serrated paring knife (or whatever sharp knife you prefer), core the tomatoes and halve them. You should be left with about 8 cups total once all the tomatoes are halved. Don’t worry about making them perfect, we’re going to coarsely chop them in the next step.

There are two methods you can use to chop up the tomatoes: a knife or a food processor. I’ve used both methods and they work equally well, one just takes a little bit longer. If you’re using a food processor, avoid puréeing the tomatoes—this jam is best when it has some texture going on.

You’ll probably need to chop the tomatoes in batches, too, to avoid crushing the tomatoes on the bottom of the bowl while the rest of the tomatoes get chopped.

For a chunkier jam, go with hand chopping, and that’s my preference. 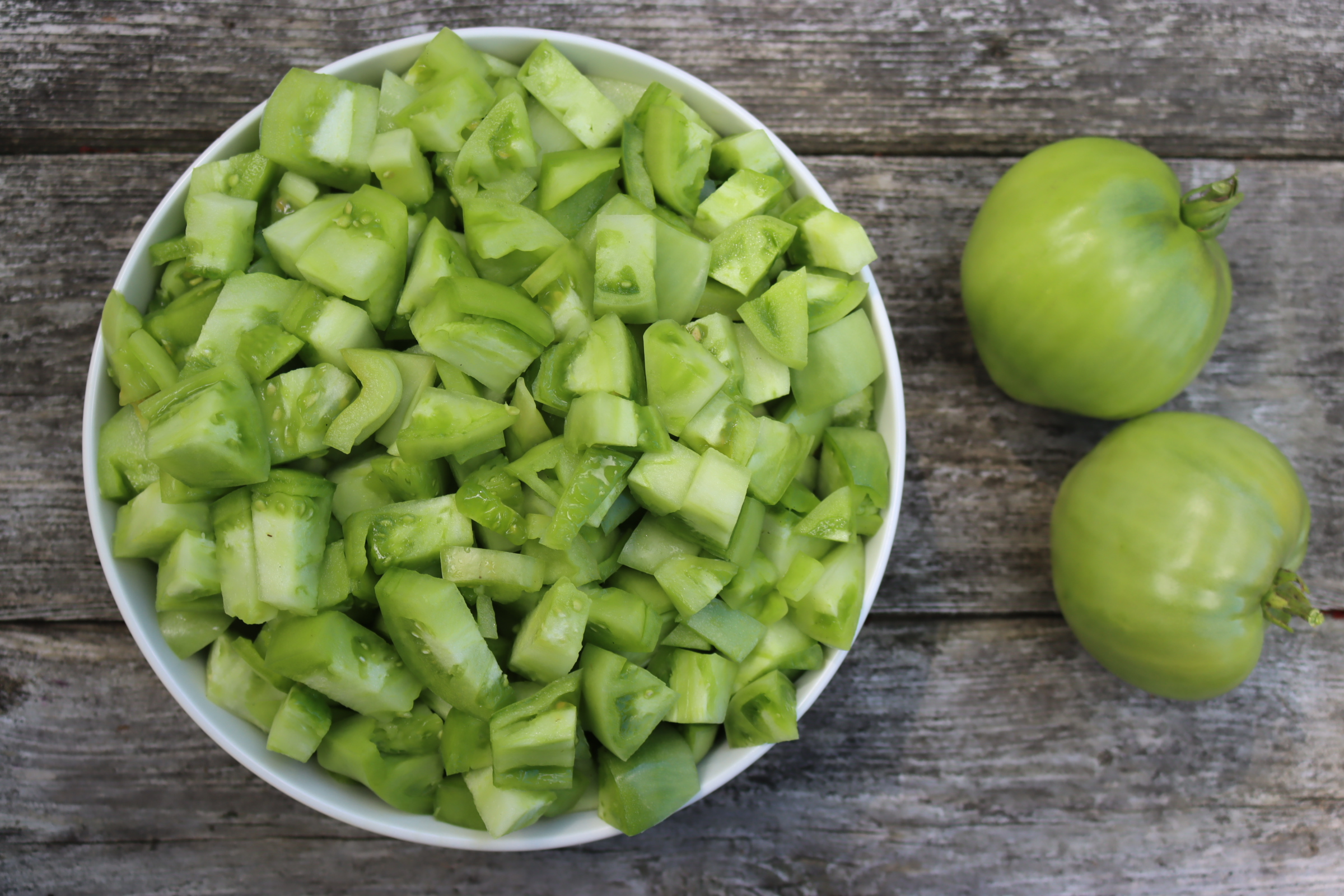 Whether you’re working by hand or with a food processor, add the chopped green tomatoes to a large heavy-bottomed stockpot as you work.

Once the tomatoes are completely chopped up and in the stockpot, we’re going to add:

Stir the ingredients to combine, and bring the contents of the pot to a boil over medium-high heat. Let the tomatoes, spices, and lemon slices boil for 25 minutes, stirring more-and-more frequently to prevent scorching. In the last couple of minutes, I usually find myself stirring constantly—the mixture will be very hot and bubbling by this point, so be mindful of spatters.

After 25 minutes has passed, reduce the heat down to low and simmer the green tomato mixture for another 30 minutes, still stirring frequently. Over the course of half an hour, the naturally-occurring pectins in the green tomatoes should start to naturally thicken. If the jam is still on the watery side when the timer goes off, keep simmering until it reaches the desired consistency. 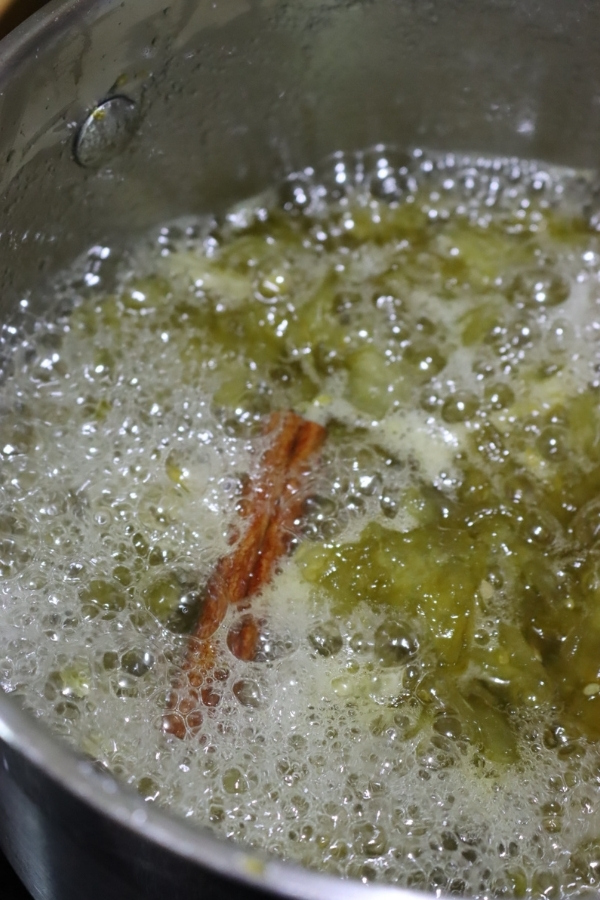 Making Green Tomato Jam – This is just as the jam is nearly cooked, it’s just starting to reach gel stage with the natural pectin in the green tomatoes.  You’ll remove the cinnamon stick after cooking.

Remove the green tomato jam from the heat (remove the cinnamon stick, if using instead of ground spices) and decant into hot, sterilized jars using a ladle and a canning funnel, leaving a 1/4-inch headspace.

For this recipe, I like to preserve the jam in either 4 (1-pint) jars or 8 (1/2-pint) jars. Using either a chopstick or a plastic knife, break apart any air bubbles you can see, adding more jam if needed to the jar to maintain that 1/4-inch headspace. Wipe the rim and sides of each jar with a clean cloth and apply a two-part canning lid until fingertip tight.

From here, you have the option of storing the canned jam in the fridge as a refrigerator jam (in which case it should be consumed within 2 weeks), or you can preserve the jam using a hot water canner using the steps listed below.

Tomatoes are often considered “high acid” fruit, but when it comes to canning, they actually need the help of an additional acid to make them safe for home canning projects. Green tomatoes are actually fairly acidic on their own, but in this recipe lemon slices are added to bolster the acidity of the finished jam before it’s canned.

Load the jars of green tomato jam into a prepared hot water bath canner, making sure they’re covered with at least 1 inch of boiling water that has 2 tablespoons of white vinegar added to it. The vinegar is optional—some people like to use it in the water while canning because it helps to descale hard water and rid it of small particulates that could potentially build up on the canner or on the actual jars.

Let the water come back to a boil and process the jars for 20 minutes— the time is the same whether you’re working with pints or 1/2 pints.

When the timer goes off, turn off the heat and let the jars sit in the hot water for another 5 minutes before removing from the canner using a jar lifter. Place the jars on a clean surface, leaving at least 1 inch of space between each jar, and let the contents come to room temperature (this usually takes about 12 hours).

Check the seal on the jars, transporting any unsealed jars to the fridge. Remove the band from sealed jars so that they can be used for another canning project and store the green tomato jam in a cool, dry space away from direct light.

Properly canned and sealed jars will keep on the pantry shelf for 12-18 months without losing quality.  Refrigerate after opening. 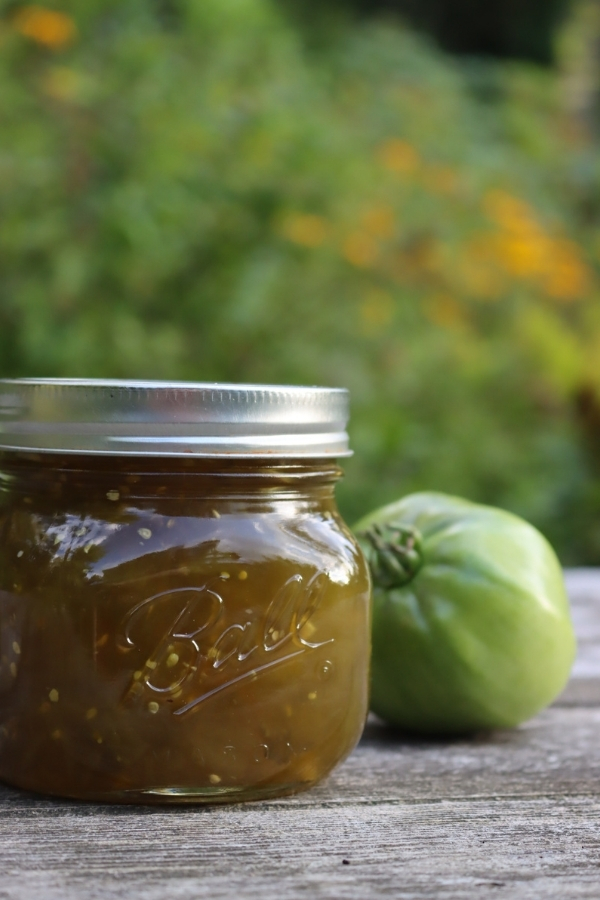 Looking for more ways to use green tomatoes?

A sweet and slightly citrus-tart jam made from unripened green tomatoes.

*If you prefer to make a refrigerator jam, simply transfer the jars of jam to the fridge and use within 2 weeks.

This recipe is adapted from the Beginners Guide to Canning by Diane Devereaux.

Preserving more than just green tomatoes this fall?  I have literally hundreds of canning recipes on the site, and here’s a few to get you started: 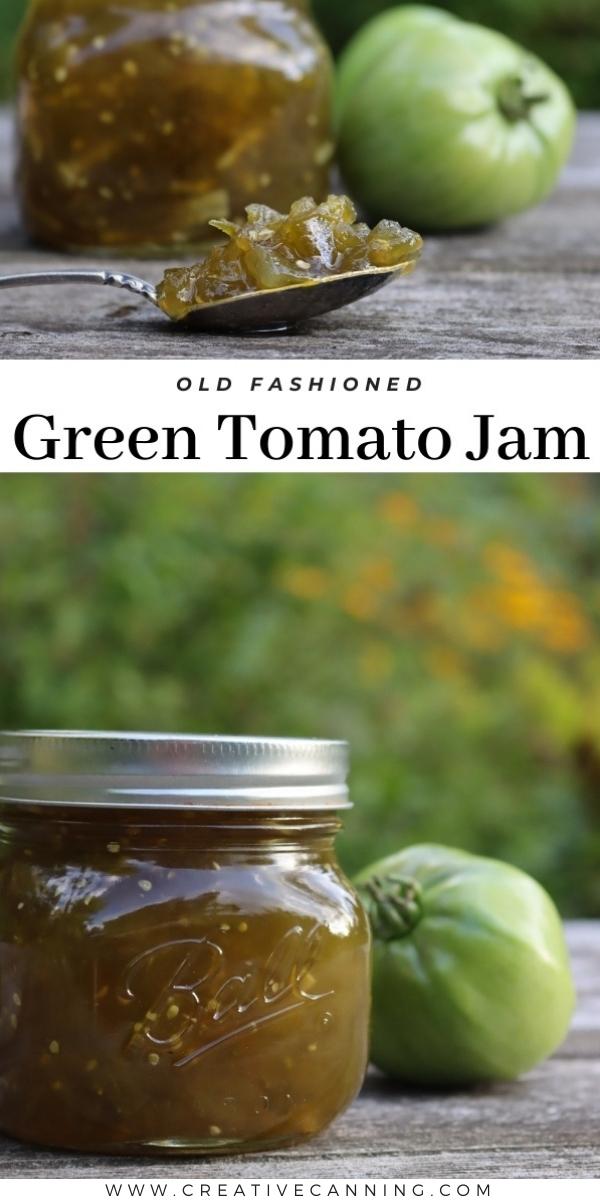